EFHA member Clive Leyland was a singer-songwriter with strong links to the Bolton area and a deep interest in his own family history and the history of Lancashire.

In 2004, he made a CD of original songs – called “ A Northern Man” which he describes as “snapshots of life in and around a Lancashire town over the last 200 years”. They arose out of research into his own family which expanded into the historical setting in which his ancestors found themselves. Piecing together some of the stories, he found they slotted into a chronological order ranging from 1803 – when his great great great grandfather “left the land” as a farmer in Rivington, to the present day. 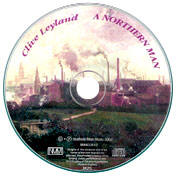 His interest was not just in the well-known story of the Industrial Revolution but in what went before it and what will follow now that that episode is over. In the substantial booklet accompanying the CD, Clive says “everyone comes from somewhere”. Every family has its unique stories that reflect the circumstances that people lived in. Clive was

of the view that family history is not just about “how far back you’ve got” – it’s real significance is in understanding how people lived in terms of their individual joys and tragedies as well as the overall historical context.

Clive’s maternal grandmother was Mary Alice Entwistle of Morris Green, Bolton who married a coalminer, John Hulme whose origins were in Blackrod. Clive’s paternal grandfather, Harry Leyland – a bleacher from Halliwell, Bolton – married Henrietta Wilcock of Astley Bridge, Bolton. These four surnames – Entwistle, Hulme, Leyland and Wilcock – formed the starting point for his family research some fifteen years ago and incidents from the histories of all four families are the subject of songs on the CD. Personal stories are set against the background of major events such as the two world wars, local disasters such as the Pretoria Pit explosion, emigration and conditions in the cotton mills.

After the EFHA AGM in October 2005, Clive performed a selection of songs from the CD and added a new one about a small prayer book which had belonged to a Bessie Entwistle of Morris Green, Bolton and which was discovered in an auction sale in Vancouver, Canada. An article on the prayer book is in the December 2005 issue of Twissle Times.

Further information on Clive can be found on his website at www.cliveleyland.com through which his CD may be purchased.